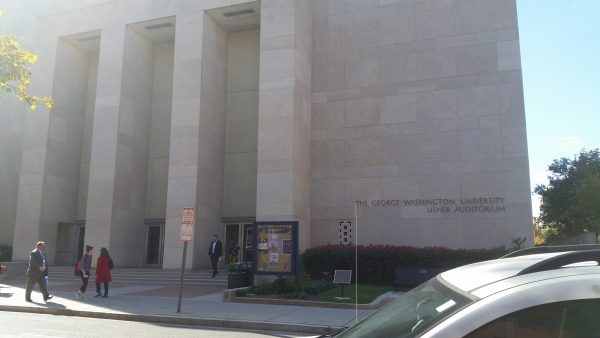 An urban university that also manages to maintain an insular campus atmosphere, the George Washington University is something unique. Its location in the heart of Washington, DC – just block 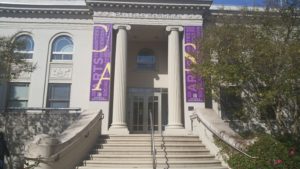 s from the White House – is an asset that the university exploits to its fullest, whether through engineering students performing research on sea lions at the National Zoo, or through giving students access to key internships throughout one of the most powerful cities in the world.

Founded by an act of Congress in 1821, and located in the Foggy Bottom neighborhood of the District, the George Washington University now owns the highest number of buildings in the area after the federal government. GW, as it is affectionately called, is a medium-sized institution composed of 11,000 undergraduate students spread out over the university’s seven academic schools, encompassing over 75 majors, including such diverse options as Africana Studies, Graphic Design, International Affairs, and Civil Engineering. The student-faculty ratio is 13:1, all courses are taught by professors, and the average class size is 28 students. University prerequisites depend upon one’s major, but all first-year students must take the University Writing course, which prepares them for university-level research and writing.

Though most of the campus activity takes place on the Foggy Bottom campus, there are some classes and residential facilities located at the smaller, quieter Mount Vernon campus, which is a 15-minute shuttle ride away. Shuttles run every five and fifteen minutes during school hours and outside school hours, respectively.

Outside the classroom, GW boasts a rich student life, with more than 450 student organizations, the biggest two of which are not surprisingly the Campus Democrats and the Campus Republicans clubs. Students also participate in the 27 NCAA Division I athletic teams, club and intramural sports, and campus Greek life. 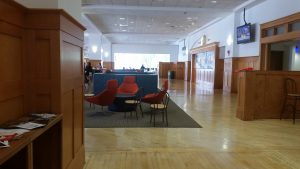 The university’s motto, “Knowledge in Action,” underscores the three foundational aspects of a student’s GW experience: service, study abroad, and internships. Due to its location in DC, a city characterized by both immense wealth and great poverty, service is very important to the GW community; on the second Saturday of a student’s first year, the entire freshman class goes out into the city and volunteers in various local organizations. Last year alone, GW was responsible for over 600, 000 hours of community service.

Over 40 percent of students partake in the second aspect of the GW experience: study abroad. Students across all academic disciplines are heavily encouraged to study in over 60 countries, whether it is for a summer, a semester, a year, or during GW’s alternative breaks, which are service learning trips during winter and spring breaks. Academic advisors work closely with students to ensure that they meet any graduation requirements in the process.

The final aspect of the GW experience is one that seems to underpin the entire undergraduate experience: internships. As Washington, DC is home to the offices of many local, national, and international organizations, GW encourages and facilitates internships throughout the city so that students can build work experience and graduate with a good idea of what kind of work they wish to pursue. Approximately 90% of GW students will have completed at least one internship, with many students completing more than one.

With tuition costs at around $52,000, GW relies on endowments to make itself affordable to its students. Students who apply for admission to GW do not need to submit extra applications for financial aid; along with their admissions letter, students are provided their aid package, including both need-based, which will be determined through the FAFSA, and merit-based, which will be determined based on the strength of the students high school performance. Another university strategy is to lock in rates upon freshman enrollment; the cost of tuition is locked in for the next five years and will not increase every year, as in many universities. Tuition rates will also not change while students are abroad, and their financial aid will travel with them. 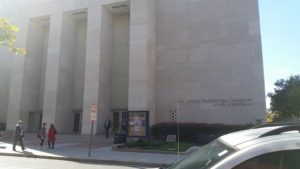 GW is a common app exclusive institution and applicants have the option of three rounds of admission: Early Decision I, Early Decision II, and Regular Decision. GW recently became the largest private institution to become test-optional, so students are not obligated to provide SAT or ACT scores. In fact, admissions officers say that, though doing well on standardized tests is something to be proud of, what the admissions team is really looking at closely is how rigorous a student’s high school coursework was, including AP and IB classes.