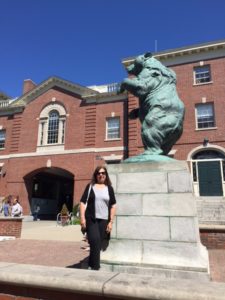 There was a palpable air of earnest anxiety in the waiting area of the Stephen Robert Campus Center of Brown University on a hot Monday morning in August (which also happened to be a Rhode Island state holiday: Victory over Japan Day).  Literally hundreds of prospective candidates were already on guided tours or waiting to pour into the info session at 10 a.m. Those who were waiting for info sessions were either pacing nervously or bent over their cell phones.  Nobody was making eye contact, and it was as quiet as a hospital waiting room. The campus is stately and beautiful, just down the street from RISD, and exudes an aura of thoughtful wisdom.  The academics are dreamy, and the promise of intellectual stimulation is excitingly desirable…but for so many anxious applicants, it is also quite a reach.

After all, this is Brown.  With its overall acceptance rate of 9.6% of applicants in 2016 (28,742 applicants and 2,760 accepted), Brown ranks fifth in difficulty of admission among the Ivy League Schools (U Penn and Cornell’s numbers are a bit more encouraging. Check out Ivy Coach’s 2016 Ivy League Admissions Statistics to see how Brown compares with its Ivy League peers).

Chartered in 1764 as “the College or University in the English Colony of Rhode Island and Providence Plantations, in New England, in America,” the college was renamed in 1804 after alumnus and generous donor Nicholas, the nephew of the famous abolitionist John Brown, who donated $5,000 to the school when tuition was only $5. Brown established a Women’s College in 1891, which later became Pembroke College in Brown University.  The school became co-ed in 1971. 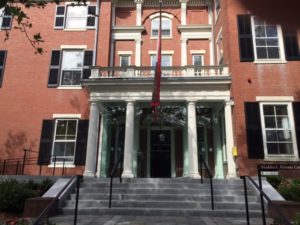 Brown is known for its open curriculum; as a matter of fact, although the students during the information session sat stone-faced when the admissions officer asked them to share “fun facts” that they had learned from a brief sharing moment with their neighbors in the auditorium,  students were eager to share their understanding of Brown’s academic creativity.  There are no core requirements or distribution requirements.  This concept was introduced in the 1960s as a result of student activists who   wanted power over their curriculum. The administration agreed and adopted the “new curriculum.”  Now Brown offers over 2000 courses a year, and students spend the first two weeks of classes during what is called a “Shopping period.”  As opposed to schools with more stringent add/drop rules, Brown students may sample classes and see if the professors are a good fit for them, and they may  add or drop classes at will.

The grading options at Brown are also far from typical: According to the Brown website, students may, in consultation with the advisor, choose to be graded on a basis of either A,B,C/No Credit or Satisfactory/No Credit. All courses, except in cases of Mandatory S/NC courses default to A,B, C/NC upon initial registration. Students have a month to decide on their options per course.  The motivation is that in this way, students can focus on learning instead of worrying about the pressure of grades.  Some classes are even mandatory S/NC! 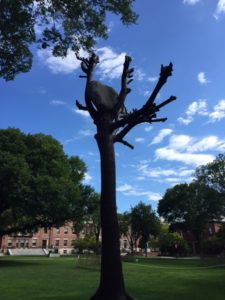 As a major research university, has 6600 undergraduates and 2500 graduate students.  The students say that the professors are very open to undergrads doing research, and money is available and there are link awards if you do the work elsewhere. There is considerable formal and informal advising on the part of professors and upperclassmen, and the ambience is one of shared interest in learning as well as creating your own academic concentrations.  It is essential to demonstrate writing proficiency as an undergrad at Brown, and it is quite common for students’ work to be published before they graduate.

As mentioned in the RISD review, Brown and RISD offer a dual degree program for a select number of students who “want it all.”  And since the schools are within easy walking distance in a charming area, the accessibility of the strengths of the schools might be a lucky draw for some talented applicants, especially when one discovers that 70 percent of Early Decision applicants were deferred to Regular Admissions last year. By the way, interviews are encouraged, and applicants should definitely arrange for an interview a month after they apply.

It may not be fun trying to get accepted to Brown. The faces of the applicants at the information session looked pinched and drawn as they exited to go for the tour, but there is some levity in the Brown community. For example,

(Credit for the above fun facts about Brown University goes to AdmitSee.)

Want more detailed information about life at Brown? Check out Facts About Brown!