Chapman University is set on a 75-acre palm tree-lined campus in Orange, California, a major city with a small-town 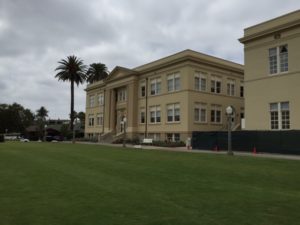 vibe.  With its blend of traditional and contemporary buildings, the campus has actually been on a variety of movie sets, including “Accepted” and “Crimson Tide.” Similarly, the picturesque Main Street in the Old Towne section of Orange, which abounds with cafes, restaurants and shops, can be seen in “That Thing You Do!” and “Big Momma’s House.” The outstanding Southern California weather adds to the relaxing and pleasant atmosphere of the university, and from the moment visitors enter the Student Union, they can appreciate the sense of eagerness to help on the part of the admissions officers and the tour guides.

Chapman has a very strong vision that emphasizes the interdisciplinary study of the arts and sciences as well as professional programs, giving both undergraduate and graduate students the opportunity to become multidimensional, original thinkers. The university has the following schools: Wilkinson College of Arts, Humanities, and Social Sciences, the Argyros School of Business & Economics, the Dodge College of Film and Media Arts, the Crean College of Health and Behavioral Studies, the College of Performing Arts, Schmid College of Science & Technology, the Fowler School of Law and the School of Pharmacy. 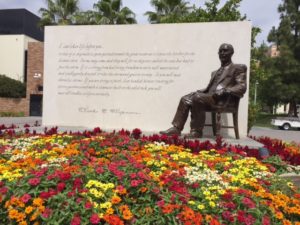 The most popular majors are business administration and management, cinematography and film/video production, public relations/image management.  The student/faculty ratio is 14:1.  There is a university honors program as well as services for physically disabled students. The university offers a 4-1-4 calendar, with “Interterm” as a popular opportunity for the month of January. Class size averages 23 students.

Dodge College is particularly impressive: Recognized as one of the top ten film schools in the world and ranked #7 by The Hollywood Reporter among American film schools, Dodge offers undergraduate and graduate degrees that address the rapidly changing entertainment business with state-of-the-art facilities open 24/7. Many faculty members work in the industry and provide hands-on, collaborative learning. Also worth noting are the Anderson Center for Economic Research, the Leatherby Center for Entrepreneurship and Business Ethics, the Guggenheim Art Gallery, the Waltmar Theatre, and the Albert Schweitzer Collection.

According to Chapman’s website, it is not a Christian college, but has been related to the Disciples of Christ Church 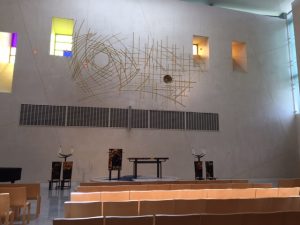 since its founding in 1861 and with the United Church of Christ since 2011. The university offers a focus on “incorporating spirituality and reason” into university life.  The lovely and intriguing Fish Interfaith Center is designed to give students of all faiths a space to express their individual beliefs.

The school also is very proud of its increased scope in terms of its student population.  With approximately 6,400 students, Chapman proudly flies the flags of over 80 countries represented in is student body.  There are about 165 student organizations and a variety of Panthers teams, including five club sports and 20 NCAA Division III varsity teams. Greek life is quite popular: 34 percent of the students participate in fraternities and sororities.

Local opportunities also abound for Chapman students:  Museums, amusement parks, sports, shopping, entertainment and beaches are exciting opportunities to explore, and students have many opportunities for internships and jobs. Tour guides are quick to point out that students can get to Disneyland in 15 minutes, Long Beach in a half hour, and Los Angeles in an hour. Many large corporations are based in Orange County, including KIA, Gateway, Allergan, Disney, and Blizzard Entertainment. 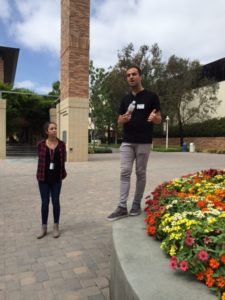 Notable alumni include Emmett Ashford, the first African-American umpire in Major League Baseball; Jodie Lee Ann Sweetin, actress and television personality, best known for her role as Stephanie Tanner on the long-running television sitcom “Full House,” and Kellan Lutz, whose acting credits include “Twilight” and “The Legend of Hercules.”

Chapman’s deadlines vary according to programs, but November 1 is crucial: It is required for Film Production; priority for applicants planning to major in pharmacy, screen acting and theatre performance, and for early action.  Regular decision deadline is January 15.  Applicants to Chapman may   use the Common Application.

In addition to on-campus information sessions and tours, applicants can participate in “fellow” interviews with accomplished upperclassmen. The admissions staff also travels throughout the country: check out CU On the Road for more information. 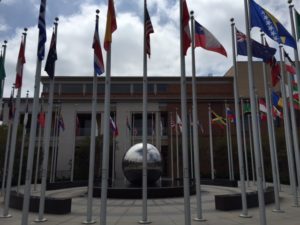